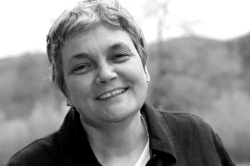 The playwright, CHRISTIAN McEWEN, is a writer, cultural activist, and workshop leader, currently based in Williamsburg, MA. In addition to her work on women and money, Christian has edited four anthologies, including Jo’s Girls: Tomboy Tales of High Adventure, and The Alphabet of the Trees: A Guide to Nature Writing, and has written for the Nation and The Village Voice. Her poems and essays have been widely published, and she helped produce the video documentary, Tomboys!  Her book, World Enough & Time: On Creativity and Slowing Down (Bauhan Publishing, 2011), is now in its sixth printing, and is also available in an audio edition. Last fall it gave rise to a little book of slow quotes, called The Tortoise Diaries. Christian’s newest book is Sparks from the Anvil: The Smith College Poetry Interviews, and includes interviews with W.S. Merwin, Maxine Kumin and Yusef Komunyakaa.

Christian grew up in the Borders of Scotland, and first came to the United States on a Fulbright Scholarship in 1979. She has since taught poetry and creative writing at numerous venues, including the Scottish Poetry Library in Edinburgh, Williams College and Lesley University in Massachusetts, and the Zen Mountain Monastery in Upstate New York. She has also worked as a writer-in-the-schools. Christian has been a fellow, several times, at the Macdowell Colony, and Yaddo. In 2011 she received a grant in playwriting from the MA Cultural Council.